It feels like the world has come to a screeching halt. People are stuck inside, left to mine the tumultuous caverns of social media and the bleak news on TV. Some without a source of income. Some with an ever-present fear of the virus making its way around the globe.

But, for four brothers on the west side of League City, it’s been an opportunity for them to use their gifts in a way they never expected.

“I told the boys I wanted them to do some kind of community service to help encourage people with everything that is going on,” Jennifer Keown said about her conversation with her four sons: Micah (15 years old) – a freshmen at Clear Springs High School – Caleb (12), Joshua (12) – who actually plays the viola – and Andrew (9).

The proposal: play violin driveway concerts for families in the community.

“They were agreeable to it,” Jennifer said. “But with teenage boys, you know, it can be hard.”

The boys felt a little shy about getting started, thinking most people probably wouldn’t want to listen to classical violin music, especially in the current state of things. So Jennifer posted about it on Facebook to gauge interest.

It didn’t take long for the responses to start rolling in.

“They were still unsure,” Jennifer said. “But then they actually played for people, and they started getting comments of just how thankful people were… And at the various places we would go, there might be other people we didn’t know who were around. You know, some neighbors, or some guys who were out mowing lawns or whatever that would end up listening to them, too. So that was kind of fun.”

They even got to play for a family friend with a daughter who has medical needs that put her in a high risk group for COVID-19. As a bonus, she is really interested in playing the violin.

The Keowns have now played at six different homes, and say they aren’t planning on stopping anytime soon.

“I just think it gives people a chance to see a familiar face, and someone smiling, and doing something besides thinking about this virus for just a few minutes,” Jennifer said. “So I think it’s just a way to spread joy, and to spread God’s love to other people. And to say, Hey, you don’t have to just sit at home and be afraid all the time. We can still do things that are fun and joyful and bring a smile to people’s faces. 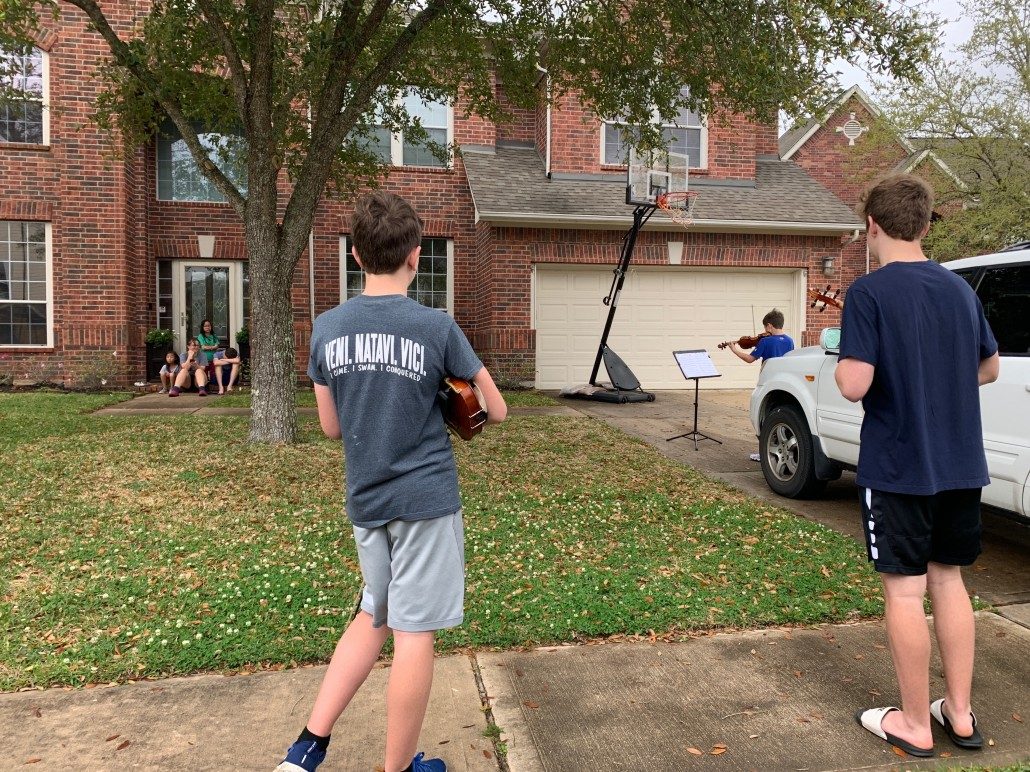 “So, I think it’s been cool for the boys to be able to do something that’s actually brought joy to someone else. It’s real! It’s not something other people can easily do, because not everybody has that skillset. And so it’s been a good lesson for them, to just realize, Okay, I do have the ability to serve others in this. And it doesn’t have to look a certain way. It can be the thing that I’m good at.”

After a day of playing violin in people’s driveways when they would have normally been at school or chosen to relax, Micah summed it all up in his own way.

“My oldest son always says, ‘Anytime Mom says, “Hey I’ve got a great idea!” that’s when you know it’s going to be a bad idea,’” Jennifer laughs. “But, on the way home, he said, ‘But this really was a great idea!’”