Growing up on a farm in northeast Kansas bolstered Nate Fisher with good morals, a hard work ethic, and some spiritual understanding, as his mom regularly took him and his sister to church in the small town nearby. 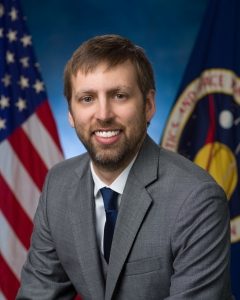 “What I took away from my family was that to get through life, you want to be a productive person and not a weight on society and culture,” 33-year-old Nate said.

Nate also lived by the idea that while you are working to provide for yourself, you should also treat your neighbors well.  To an extent, Nate believed that if he treated others well, then they would approve of him and, in turn, treat him well, and that all of this would lead to happiness in life.

Instead it led to a chaotic life with sporadic highs and crushing lows that included depression.

“My self-value was anchored in my performance at work and my perception of what others thought about me,” Nate said.

But that anchor didn’t hold.

As a kid, Nate was always interested in science.  With hopes of becoming an astronaut, he pursued an engineering degree at Kansas State University.  However, as he studied science, he found it difficult to reconcile the latest theories—how old the universe is, what stuff it is made up of, how our solar system came to be—with the Bible stories he had heard about growing up.

“When I came to college, I started drifting away from any kind of religious values that I did have.  I perceived religious people to be very two dimensional, always putting on a happy-go-lucky persona, and whitewashing all the bad things in the world.”

Nate’s vision in life was to finish college, get an internship, and get a job.  Towards the end of his college career, he landed himself a multi-semester internship with NASA Johnson Space Center, which then led to a post-college job offer.  Once he got the job, his focus then became working hard and saving up money for retirement. But his flight operations job was very competitive and, while he wasn’t the bottom performing person, he also wasn’t the top performer.  Once again, he had to prove his worth and gain other people’s approval through his performance. After finally passing his first certification, Nate’s immediate future seemed secure. But all his hard work didn’t pay off with the contentment he’d hoped for.  All the while, Nate was slipping further into depression.

“I remember sitting at my desk at the house I was renting and realizing, So I’ll work for a while. Maybe I’ll get married, maybe not.  I’ll eventually retire. Maybe I’ll move back to Kansas, maybe not. I’ll keep hanging out with friends, and then I’ll die, and the universe will continue to exist without me.And I remember thinking, Wow. That really sucks. What’s the point of all this suffering?  Sometimes you’re happy, but most of the time you’re not. What’s the point of all of this? It just seemed like a gigantic waste of time.”

Within the next month of having that conscious thought, Nate was invited to a Bible study and to church by three different people: a friend from work, his roommate, and a cute girl named Rachel.

“I thought it was kind of funny.  I had just been wondering about the point of life, and then all of this happened.  It was very surreal. It seemed like the universe was telling me to do this.”

“I went to the Bible study that my good friend was starting, and I also went to church with Rachel, because she was much cuter than my dude roommate.”  That church happened to be Clear Creek Community Church. It was 2013 when Nate started attending on and off for the next year-and-a-half.

Through studying the New Testament book of John in the small group, and listening to the sermon series at church, Nate began to see a greater purpose than simply living, working and dying .

“I slowly came to the conclusion that life isn’t all terrible things. There are good things to it, too. It started to make sense that serving Christ, becoming a member of his church, doing what he tells us to do, living the way he tells us to— really his whole message— that is the real point of life.  It’s not just this gigantic chaotic thing that just sucks at the end.  It’s actually really beautiful.”

After studying John, his small group read through Genesis, and Nate began making connections between the Old and New Testament histories and the more he studied, the more his preconceived ideas began to be challenged.  It even opened up the possibility that science and the Bible aren’t mutually exclusive.

“The more I learn about science just points me to the beauty of creation. God made an incredibly ordered world and studying the world and physics is just another form of worship. Diving into all the little details and learning about it only increases his magnificence.”

Nate got baptized and a few months later started dating the cute girl, Rachel, who had originally invited him to church. They eventually married, and now Nate currently volunteers with the technical arts team, running the sound board at the Egret Bay campus.

But just because he became a Christian didn’t instantly take away his struggles.

“One of my biggest preconceived ideas when I was a kid was that if you were a Christian, your life is perfect and everything goes your way and you’re happy all the time.”

While it’s not as deep-seated as before, Nate stills struggles with wanting other people’s approval to give him a sense of worth.

But, instead of focusing on doing what he needs to do to make other people feel good, and mostly looking to his performance and productivity at work for personal self-worth, Nate has started to replace that with what the Bible tells us about where we should find our self-worth.

“My highs and lows aren’t as big as they used to be, because now I find my self-worth is grounded in something different than it was before.”

He has made a practice of taking the time to get up earlier than he really needs to go to work to read his Bible — not just to read the words and go, but read it slowly and think about what the words actually mean.

“If I can start my day off that way, then it gives me the tools to try to enter into the various things that happen to me during the day and attack it with the right point of view such that I can do my best to honor God.”

While Nate claims it’s no silver bullet, he finds that studying the Bible daily does help to keep him in the right mindset.

“This world can seem chaotic and crazy and full of badness that seems to go unchecked, but all of that will be made right one day,” Nate said.  “We have to trust in a power that’s bigger than ourselves. The creator of the universe obviously has the power to do what he wants. So there’s a reason all of this is happening.  Even if we don’t understand it, that doesn’t mean that the reason doesn’t exist.”