Social media and our online lives have created tremendous opportunity for our voices to be heard. From YouTube to Instagram to TikTok, we have an amplifier for our thoughts and opinions, whether essential, mundane, or off-the-wall.

Yet often as Christians, we hesitate to speak. Not about everything — we’ve no compunctions when it comes to sneakers, snacks, or Star Wars. But when it comes to faith, we often muzzle ourselves out of fear. Maybe we just don’t know enough. Maybe someone will be offended. Maybe we’ll come across as just another keyboard warrior lacking in love.

I’ve certainly missed opportunities to speak faithfully in the public square, finding it easier and more comfortable to stay quiet. But this habit of hesitancy can also creep into my offline relationships. I don’t want to disturb relationships or sound judgmental. I may be unsure of the Bible’s application to a situation. So, the moments to speak life-giving words of loving truth pass me by.

How can we find the courage to proclaim the words of God to those around us? A helpful example sometimes comes from an unexpected place. Mentioned in only one Biblical story, the prophetess Huldah spoke the right words at the right time.

After centuries of ongoing idolatry among God’s people, the young King Josiah began to seek the Lord, tearing down altars to false gods and restoring Solomon’s temple to its former glory. It was during this project that the high priest made a discovery that would shape the nation’s history – a book of the Law  (probably Deuteronomy) was found in the temple. It was immediately sent, and read, to the king, who reacted with desperate sorrow. He tore his clothes, knowing that the Law revealed his nation’s guilt and the curses that they rightfully deserved.

But, Josiah did not give in to despair. The history of God’s people is replete with tales of God restoring his people after they have strayed from his ways, and Josiah knew what he needed do: seek the Lord. He needed a voice to interpret the Scripture and show him a path forward that would rescue the people of God. But he didn’t turn to the priests who discovered the scroll. He didn’t even send for one of the writing prophets who were active during his time: Zephaniah, Nahum, or Jeremiah.

Instead, this is where Huldah enters the story. We don’t know why Josiah’s advisors approached her other than her identity as a prophetess. But when Josiah commands them to inquire of the Lord, hers is the home that they visit. And her response is the only recorded statement by a woman throughout Scripture that begins with the ubiquitous prophetic phrase, “Thus says the Lord.”

If you or I were put in this position, we might have been tempted to pull our punches — to reassure, support, encourage, or dissemble. The king had the power and authority to punish on a whim, so fear might have motivated us. Josiah was striving to bring his nation back to the worship of Yahweh, so sympathy may have swayed our hearts as well. But Huldah’s words were bold and clear:

Thus says the Lord, “Behold, I will bring disaster upon this place and upon its inhabitants, all the words of the book that the king of Judah has read. Because they have forsaken me and have made offerings to other gods, that they might provoke me to anger with all the work of their hands, therefore my wrath will be kindled against this place, and it will not be quenched.”

Huldah’s speech was courageous and wise. She not only knew the contents of the law but also the heart of its author. She heard the Lord’s voice and shared his words without fear, because she trusted him. Knowing that this message wouldn’t make her popular or admired didn’t deter her bold, faithful proclamation.

Huldah the prophetess never appears again in Scripture, but her knowledge of God and his word had a catalytic effect when she was willing to share it with others. Though her prophecy of judgment came to pass within a generation, there was a renewal of faith and worship in Josiah’s reign. Her courage to proclaim God’s word shaped a nation.

May we be people who pursue the Lord so that our relationship with him might overflow into the lives of those around us, with love, truth, and mercy. May we shake off our fear, emboldened to speak his words.

I will also speak of your testimonies before kings

and shall not be put to shame,

for I find my delight in your commandments, 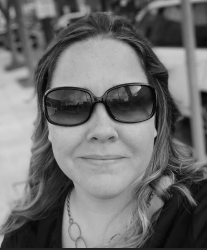