The name Immanuel,¹ which means “God with us,” is found only three times in Scripture. More than a hymn sung at Christmas, its meaning is wrapped in the tension between fear and peace, between the tangible and eternal. After the fall of mankind in the Garden of Eden (Genesis 2:8), there was fear and shame. Until then, God’s presence had brought peace and safety. Through Isaiah, God prophesied a time when his presence would restore peace to his people.

Therefore the Lord himself will give you a sign. Behold, the virgin shall conceive and bear a son, and shall call his name Immanuel.

The first time we read the word “Immanuel” in the Bible, the prophet Isaiah is speaking to the leader of Judah, King Ahaz. Israel, a combination of ten tribes, had allied with Syria to attack Judah, a nation of only two tribes. The enemies were real. They were nearby. They were invading Judah.

Isaiah and his son met Ahaz outside the palace to deliver the message that God would deliver Judah despite the odds. Isaiah promised a sign so that Ahaz would believe and would not follow through with his plan to forge an unholy allegiance. After the king refused, Isaiah responded with, “The Lord himself will give you a sign. Behold, the virgin shall conceive and bear a son, and shall call his name Immanuel.”

Even if Ahaz was struggling to trust God in a difficult and stressful moment, Isaiah reassured him that God planned to arrive in a very real and powerful way. “God with us” was originally promised to a king and people who were afraid and facing possible destruction. It was an assurance of God’s presence in a time of great fear. It was God’s promise of internal peace despite external circumstances.

And it will sweep on into Judah, it will overflow and pass on, reaching even to the neck, and its outspread wings will fill the breadth of your land, O Immanuel.”

Ahaz refused to trust God’s sustenance and ran into the arms of an alliance with Assyria. The Assyrians would betray and pillage Judah. The second time Isaiah used the name Immanuel, it referred to the land of Judah. After disobeying God, and despite being flooded, overrun, and uncultivated due to the war, the land was named, “God is with us.” There was no peace, only God’s presence, his identity, and his commitment to the people of promise. Ultimately, but not in the near term, the enemies would be vanquished.

Isaiah was warned not to fear the same things the people feared. Judah, at the time, feared exile. They feared defeat, destruction, and death – not insignificant things! But God calls us to regard him above anything temporary. When distressed, those who wait and hope in the Lord will be an example to others (Isaiah 8:17-18).

All this took place to fulfill what the Lord had spoken by the prophet:

“Behold, the virgin shall conceive and bear a son,
and they shall call his name Immanuel”

(which means, God with us).

Fast forward several centuries. The final time we see the name Immanuel is when one of the disciples of Jesus explains the Savior’s birth. An angel of the Lord told Joseph not to fear taking Mary as his wife. Mary’s pregnancy was a fulfillment of the sign Isaiah promised to Ahaz. Quite literally, God was arriving on the scene. Joseph was challenged to commit to his bride in spite of any hesitancy or fear. He was not to fear shame. He was not to fear disapproval. Joseph was called to regard God above the reproach of his family and community. Joseph believed, obeyed, and witnessed the sign that Ahaz was denied.

Isaiah introduced the name Immanuel to the Jews. Matthew pointed to Jesus as the ultimate fulfillment of God’s peace and steadfast commitment. Our land, and our lives, may be in turmoil, yet God promises to be with us even now.

Let us hold fast to this truth and God’s peace when the fears of our times assail us. 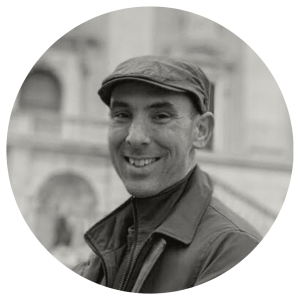 Matthew Neighbors
Matthew Neighbors is an elder at the East 96 campus of Clear Creek Community Church. He has been an educator and educational leader for more than 20 years. He is married to Allyson, a healthcare professional, and has two teenage daughters.